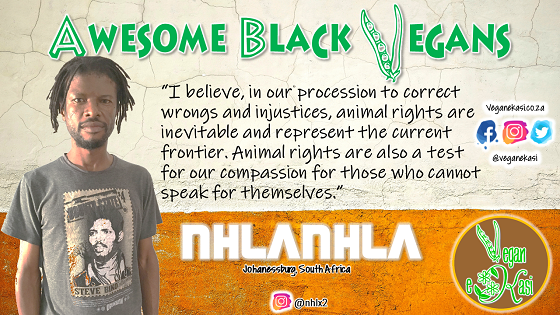 Where are you from?
I grew up in Dennilton a part of Mpumalanga at the time now part of Limpopo. I was brought up by my great-grandmother until about age six.

When did you become vegan and why?
I became vegan about 2 years ago, and have been vegetarian for over 18 years.
For me, turning vegetarian was not difficult. I was actually relieved I didn’t have to eat animals any more, something that had never stopped bugging me.

Coming from being vegetarian, turning vegan felt like a logical step I should have taken much earlier. I was in fact vegan for about a year in my early vegetarian life, but was ill-prepared both mentally and practically. Mentally, you have to be prepared to answer more questions as a vegan, in addition to the vegetarian questions. Question both from yourself and from others. Questions of nutritional sustenance and necessity. These questions would then have to be addressed practically with knowledge and a level of commitment in a not-so-conducive world. It basically meant more cooking and an adherence to some supplements.

Jump to two years ago, when a combination of factors made turning vegan an obvious option. I started feeling the long time effects of animal products in my body such as hay fever and indigestion. I noticed that by removing dairy and eggs from my diet I was able to breath from both my nostrils at the same time! Something I don’t remember ever happening! I was able to stop taking antihisthamines. I could endure longer runs and was lighter. I just felt better.

Another contributing factor was that there was a lot more awareness in veganism. I occasionally had to answer why I didn’t go all they way to being vegan as a vegetarian! Food labelling together with a proliferation of options made shopping easier. Menu tags made eating out easier too.

And last but not least there was the animal rights movement. I believe, in our procession to correct wrongs and injustices, animal rights are inevitable and represent the current frontier. Animal rights are also a test for our compassion for those who cannot speak for themselves.

How has life changed since you became vegan?
I now appreciate and enjoy preparing food a lot more!

What challenges do you face as a vegan and how do you overcome them?
Having to explain when I’m hungry. I tend to bring my own food and even cook in social gatherings which is very educational for the uninitiated.

What do you enjoy most about being vegan?
The clarity of my conscience and the benefits of my health.

What do you see in the future for veganism in Africa?
I believe Africans are better poised for veganism than it is generally understood. A lot of our meals options are already vegan and meat is traditionally viewed as a delicacy.

Anything else you would like to say?
Thank you for this opportunity. One rarely gets to reflect and share on these matters.

Where can people reach you on the networks?
Instagram: @nhlx2

Thanks to you too Brother Nhlanhla for making the time to share your awesomeness with us! We are truly humbled and gratefully appreciate it!

Before you go elsewhere on the site, what are your thoughts on this post? Let us know on the comment section! Please also subscribe to our newsletter and share on your social media pages!

Thank you!
We’ll stay in touch! 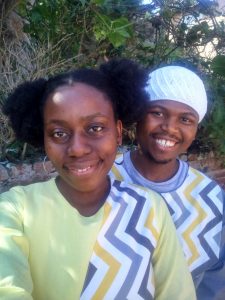